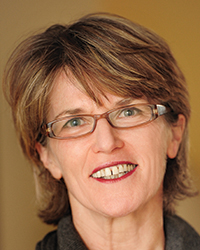 Our department has an internationally acclaimed specialty in political psychology. My research focuses on the dynamics of public opinion, and I conduct multimethod studies that involve a mix of nationally representative sample surveys, survey experiments embedded in large-scale surveys, and content analysis. I draw on basic intergroup-relations theory and research to examine the influence of gender, racial, ethnic, and political groups on political behavior.

The Department of Political Science at Stony Brook University is unusual. It’s a small niche department that does not cover all subfields of political science, some of which might be at odds with a psychological science approach to the study of politics. Over the years, the department’s focus on political psychology has gained a unique profile, attracting and retaining good faculty and drawing in strong PhD students from both the United States and other countries. Our department has hired a number of psychological scientists, and we typically advertise available positions in both psychology and political science.

I regard my PhD training as excellent preparation for my position, but there are always gaps and cultural differences across academic fields, and I still had to learn how to write for a political science audience. A good political science manuscript requires careful discussion of the political importance of a given set of research findings in addition to its broader theoretical significance. It took time to learn how to do that. The style of writing is also different; editors and readers have less tolerance for jargon. I now greatly enjoy writing in this style (although I may still sound too psychological to some political scientists), but it involved a definite change on my part.

One of the things that I like about working in a political science department is that it allows me to shift my focus away from the micro aspects of a specific psychological process to contemplate larger questions about human nature, social organization, and governance. The downside is that it is more difficult to keep up with developments in psychology, which is a large and productive field. The absence of diverse psychology colleagues makes it more difficult to follow the latest research in various subfields of psychological science. It is also difficult to regularly attend major conferences in several subfields, and that means often waiting until research is published to learn of cutting-edge or new research developments.

But the work here provides a common topic of discussion for the faculty members, a disproportionate number of whom are political junkies. Thus, as a side benefit, I am also better politically informed than I might be otherwise.