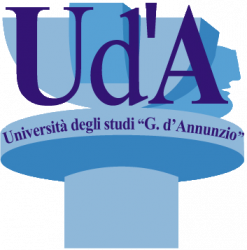 D'Annunzio University (Italian: Università degli Studi "Gabriele d'Annunzio", Ud'A) is a public research university located in Chieti and Pescara, neighbouring cities in the region of Abruzzo, Italy. Established in 1960 as a higher education institute and named after writer and poet Gabriele D'Annunzio, it was officially recognized as an independent university in 1965.

The university is formed from a variety of institutions which include thirteen academic departments organized into two schools. It provides undergraduate, graduate and post-graduate education, in addition to a range of international programs in multiple fields of study. Research is a component of each academic division, receiving funds for its scientific investigation from national and international institutions.

D'Annunzio University's main campus in Chieti features an eclectic mix of buildings encompassing 48.9 acres. A satellite campus is located in Pescara, while a distance learning center is situated in Torrevecchia Teatina. D'Annunzio University was included in the 2018 U.S. News & World Report of the world's best universities.

In addition to research conducted in the individual academic schools and departments, D'Annunzio University includes a number of research centers and institutes, including the Centre for Research in Aging (CeSI), a clinical research center, the Physical Medicine and Rehabilitation Centre, the CeSI Biotech Department (accredited by the United Nations Economic and Social Council), and the Institute of Advanced Biomedical Technologies (ITAB). The former was co-funded by the European Union in the FP3, and started its activity in 1998. It is institutionally devoted to functional imaging and, for what concerns neuroimaging, it has the specific aim at using different imaging technologies, such as functional Magnetic Resonance Imaging (fMRI), ElectroEncephaloGraphy (EEG) MagnetoEncephaloGraphy (MEG), Transcranial Magnetic Stimulation (TMS) and InfraRed Imaging (IRI) in a combined approach, in order to obtain multimodal integration.
The MEG system operative at ITAB is a whole-head system – completely developed in Italy - and features a 500-channel sensor array. Two MRI scanners (1.5T and 3.0T Philips Achieva) are also operative. Both fMRI and TMS are endowed with a simultaneous 32-64 channel EEG compatible recording device, to perform integrated measurements and combined data analysis.

Email me jobs from D'Annunzio University